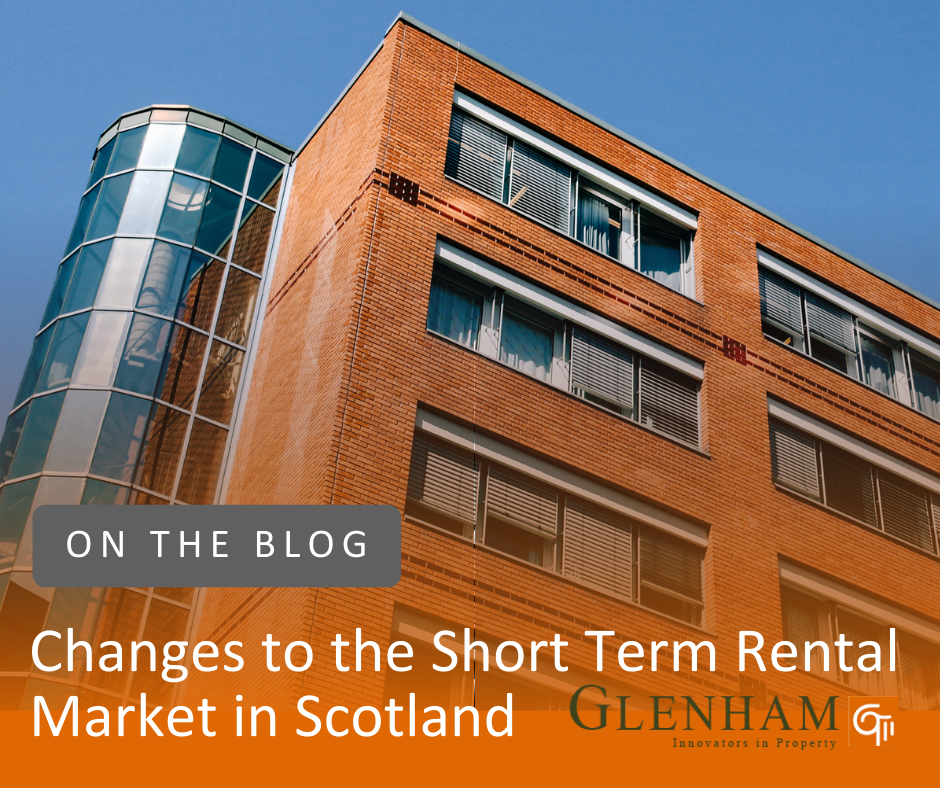 Outlook for The Short Term Rental Market in Edinburgh

The rise of the STR market across Scotland has been contentious to say the least and it is now the general consensus that there are now far too many properties that are rented out in their entirety for holiday lets. It has impacted particularly heavily in Edinburgh; the Scottish Government has estimated that there are around 16,000 properties listed on platforms like Airbnb across the capital. This directly reduces the availability of places for people to live long term in the city.

The result is the sector is becoming increasingly unpopular with residents across the country and has become a political issue with proposals for regulation having been mooted for some time.

In April 2021 the Scottish Government finally introduced legislation which allows councils across Scotland to designate all or part of their area as a Short Term Let Control Area (STRCA)
Edinburgh Council voted unanimously to declare Edinburgh as the first STRCA area in Scotland, this means is that all STR properties will require a license and most will require planning permission in order for a license to be granted. Existing hosts will have until 1st April 2023 to apply for a license for each property and all STR properties will be required to have a license in place by 1st July 2024

Most commentators believe that the ability of owners to operate STR properties in the city will be significantly restricted and many will not be granted a license. We are already seeing owners exiting the market and selling properties.

The rise of the STR market as mentioned has directly impacted the Private Rented Sector (PRS) reducing stock levels and there remains a shortage of supply of good quality rental properties in the PRS across Scotland while tenant demand continues to remain at record levels. This has resulted in rental inflation across Scotland and the UK.

Furthermore according to the Office of national Statistics the UK’s population is predicted to grow by 5.5% over the next ten years and pass 70 million by mid-2029. Over the last twenty-five years levels of owner occupation have declined and there has been a major shift in housing which has led to an increased bias to private renting both out of choice and out of need.

An extra 560,000 households are expected to be renting a home by 2023, taking the proportion of housing in the private rented sector to 22%, up from 20.6% today
Thus, the current national picture is one of elevated levels of demand for housing amid constrained supply. In the PRS this is evidenced by recent data collected by ARLA Propertymark which underlines the supply demand imbalance with the number of new prospective tenants registered per branch standing at 95

It also seems that the difficulty in finding somewhere to rent in the PRS is resulting in tenants remaining in properties for longer with tenancies lasting an average of 24 months an increase from the long term average of 19 months (based on 2015-2021 data). This reduces void periods for landlords, reduces risk and should improve overall returns.

“The private rented sector desperately needs more properties to meet the overwhelming demand from tenants. The market is starved and as such is becoming very competitive for tenants trying to secure a home”.

Zoopla report that rents for newly agreed let’s have jumped by 11% over the last year, the national average now stands at £995 PM with a property taking just 14 days to rent. The report shows strong annual growth in rents in the inner-city centres, and for the first time since the start of the pandemic, this growth has overtaken the rate of growth in the wider commuter zones.

Focusing on Scotland the ONS reported private rental prices in Scotland grew by 2.9% in the 12 months to April 2022. This is up from 2.8% in March 2022, and the highest annual growth rate since records began in 2012. In the most recent Citylets Report average rents in Scotland continue to rise with the average now standing at £896 up by 8.5% year on year (YOY) and the average Time to Let TTL figures now stands at 20 days.

The ongoing shortage of rental homes relative to demand will be a key factor underpinning rental growth across the country this year, notwithstanding the fact that the short-term economic pressures we are seeing will, inevitably, act as a brake on larger rises as household finances are stretched.

Knight Frank forecast rents across the UK are likely to rise by 4% this year. In the longer-term, supply constraints, strong tenant demand and robust earnings growth will support an increase of 17.1% in rental values over the next five years. Looking at the picture at a more granular level will show regional variations as local markets react differently and some are perhaps better insulated to economic shock than other.

The economic outlook for the city looks positive, according to Irwin Mitchell’s latest UK Powerhouse Report produced by the Centre for Economics and Business research Edinburgh will rise from being among the bottom five cities in the UK for economic output in Q4 2021 to 8th place by the end of 2023. A 2.2% year on year increase in Gross Value Added (GVA) which equates to £900m of growth and takes the total size of the economy to £23.2 billion.

With eight of the UK’s fastest growing cities in Q4 2023 set to be in the South and East of England, the report also highlights Foreign Direct Investment (FDI) as one of the reasons for continued success being located in the South.

Edinburgh is one of only two cities to buck the trend and in addition to Scotland’s placing 5th for the number of FDI projects, the country is also among those seeing the biggest reduction in the number of FDI projects when compared to rivals south of the border. With much FDI centred around financial services, it is also clear from the report that those cites with the ability to cater for this vital sector are among those continuing to perform well. In fact, the city is already home to the second largest financial sector outside of London and the 4th largest in Europe. Some 11% of the population work in the higher earning financial and insurance sectors and 55% of households earn above £40,000 PA.

Opportunities for Landlords in the Private Rented Sector

The rental market in Edinburgh has recovered fully from the impact of Covid with rents in the city rising by an unprecedented 14.2% year on year driven by a lack of supply and extremely high demand levels. The average rent for a property in the capital now stands at £1214 PM and TTL figures still low at 16 days though there has been a small increase from 11 days reported last quarter.
The population of Edinburgh is growing fast and first broke 500,000 in 2016, this had risen to 527,620 in June 2020. This growth is expected to continue at a rate of circa 5000 PA over the next 20 years. Savills have forecasted that the number of households within Edinburgh and the Lothians has the potential to increase by 25% over the period between 2017 and 2041.

The figures above are conservative compared to the growth already witnessed even over the past six years. The result is we feel the sector in the city is well placed to weather any adverse headwinds resulting from an economic slowdown and is still offers the investor opportunity for good low risk returns but investing in the right property is critical and taking professional advice in now more important than ever.

So, we firmly believe that the PRS still offers the savvy, well advised investor the opportunity for good yields and strong returns. Those owners who have been operating in the STR and who are considering exiting should perhaps not rush to sell but rather look at all their options and consider moving into the long term market.

How to swap from short to long term lets

The first thing to say is this is easy and we can make it hassle free!

Our in-house letting team would first get in touch to listen to the concerns an owner may have regarding their short-term let.

We will work with owners to conduct a full analysis to establish the property’s current value and make recommendations as to how you can maximise yields and potential returns. The focus would be on advising on the best possible solution for them and their property.

If the long-term market seems the best solution, we can then advise on all the necessary safety certificates and have recommended contractors available to put them in place all of which will be handled by our team.

We would then market the property, carryout viewings vet applicants for the property and of course manage the property once the tenants have moved in. The good news? We won’t charge you a single penny for the management of your property until we find you tenants.

If you are interested in exploring opportunities please do get in touch.

Glenham is a multi-award winning asset management company, with the asset in this case being property. Our primary focus is to ensure our clients maximise returns from their investments while at the same ensuring their legal and regulatory requirements as a landlord are met and the property is looked after and well maintained.

We understand property as an asset class and as said we are always seeking ways to maximise our clients returns, and mitigate their risk. We are constantly reviewing the market and keep up to date with any changes that could adversely affect our clients’ investments and are able to react quickly to minimise any potential damage.

We are proud of our track record and awards, as a team it is our mission to apply the traditional values of integrity and communication to build trusting relationships with our client landlords while at the same time utilising technology and innovation to ensure we remain at the forefront of the lettings business.

We are an ARLA regulated company which means we meet and surpass the minimum regulatory requirements for letting agents in Scotland. We pride ourselves on a customer focused approach to property management with a single property manager looking after your property and who will deal with all aspects of the ongoing management and tenancies.

Looking to rent out your property? Glenham offer a property management service as well as property investment advice. Get in touch to discuss your needs.