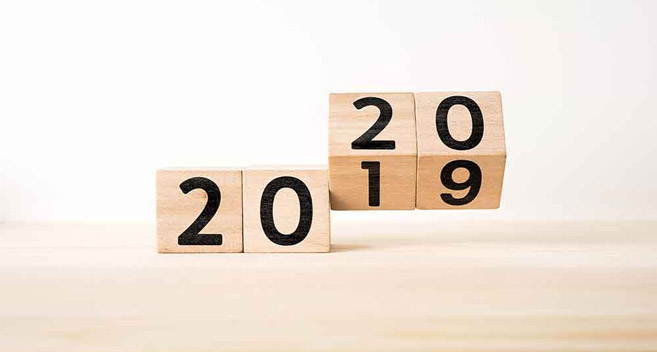 So, another year of political turmoil is over and the general election has given the Conservative party a majority in Parliament which will mean that the UK will exit the European Union by the end of the year.

Whatever your political view this does at least mean that the Gordian Knot of Brexit caused by the grid lock in Parliament is, to a degree, over. It also does mean there is at least now some clarity, though what form our divorce from Europe takes is still far from clear.

With the deadlock in parliament now over it is expected that the UK economy should benefit from the relief that the first Brexit hurdle has been safely surmounted. Quarter-on-quarter GDP growth should pick up to a 0.4% rate in Q1 and Q2 2020, exceeding this year’s average 0.2% pace. However, with the threat of a hard Brexit in 2021 still on the cards, the economy may struggle to get out of second gear.

A window of opportunity for the Bank of England MPC to raise Bank Rate might emerge in the summer, as long as the global economy has perked up by then. It could be that 2020 is the beginning of a gradual process of interest rate normalisation and will mark the end of the period of ultra-low mortgage rates. But it is expected rates will remain low compared to long-term norms with commentators predicting interest rates of below 2% by 2023.

Against the wider political and economic backdrop, the story for the UK property market in 2019 was broadly one of stagnation but not outright decline. Annual house price growth has slowed with the Office of National Statistics most recent figures showing a rate of just 0.7% on an annual basis during October which represents a significant drop from the 1.3% measured in September.

As we have mentioned some of the uncertainty around Brexit has been removed though the UK still needs to thrash out a trade deal with the EU and there is still the risk of no deal. The result is it remains unclear what will happen when the transition period finishes which is meant to be at the end of 2020 and what the long-term effect of Brexit will be on the economy.

Jeremy Leaf, former residential chairman of the Royal Institution of Chartered Surveyors, said: “The most important thing for the housing market is that the result brings some stability, albeit short-term at least until we see a clearer timetable for Brexit. This should generate a return of confidence to the market, which is what we have been looking for.”

Like the economy Residential property prices, are likely to grow faster than initially anticipated next year thanks to the greater political certainty unlocked by the Conservative Party’s decisive election victory according to Rightmove.

The property website forecasts that average asking prices will increase by 2% in 2020, up from the existing annual rate of 0.8%, thanks to low-interest rates, high employment, rising wages, greater political clarity, and a widening supply-demand imbalance.

In Rightmove’s December House Price Index it was reported that the number of sales agreed so far in 2019 is 3% lower than a year earlier, but the number of properties coming to market has dropped far more significantly by 8%, with estate agents’ stock levels at a two-year low. Property price growth is expected to be led by northern areas, with Rightmove expecting to see an increase of between 2% and 4%.

Knight Frank have also forecasted a recovery in price growth with a reported figure of 2% expected in 2020 and of 15% cumulatively between 2020 and 2024.

This projected UK growth is really only the very general picture and there will be local variations. Slightly stronger growth is expected in the South East and East of England supported by a more positive outlook for economic and employment growth over the next five years. Prices in Scotland are expected to grow by 13% over the next 5 years with 2% forecasted for 2020.

Let’s now take a look at The Private Rented Sector (PRS) which accounted for some 4.5 million households in 2017/18. We expect tenant demand to remain strong particularly across larger urban areas which will continue exert upwards pressure in rental values. Furthermore, this growth is expected to gain momentum after 2020 as hopefully there may be some more political certainty around the Brexit transition phase.

Housing is going to remain a key political issue going forwards and the government is likely to try and redress the perceived imbalances across the country as this is seen as a vote winner. The result is a reversal of the section 24 tax changes for residential property investors look very unlikely. This could result in more landlords exiting the market which will further reduce stock levels and add to the upward pressure on rents.

In summary there is now a greater degree of clarity around Brexit as a result of the victory for the Conservative party in the recent election and the fact they now have a substantial majority in Parliament. But questions still remain around what the economic landscape will look like post Brexit. A no deal exit is still very much a risk and in addition the world economy appears to be slowing. The result is trying to forecast future trends in this environment is very difficult. That said we do feel that the market has proven to be remarkable resilient over recent years and to a degree uncertainty is the new certainty. The result is we expect the market to continue to grow albeit at a subdued rate over the short term.

If you’re looking for a property management service to help you rent out and manage your property, you’ve come to the right place. We can also assist in acquiring properties via our property investment service so please do not hesitate to get in touch.